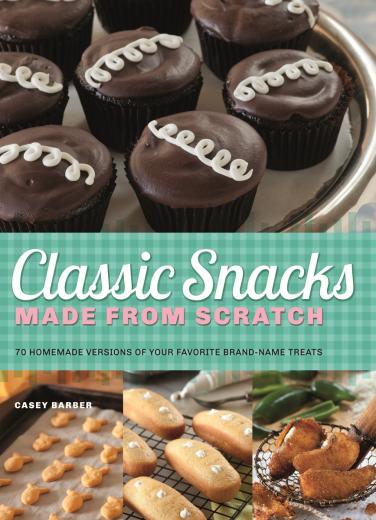 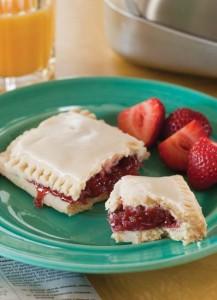 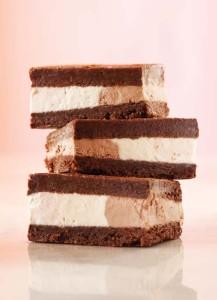 Q&A with Casey Barber, Author of Classic Snacks Made from Scratch

We are fortunate to interview Casey on how she developed recipes for her cookbook, and her thoughts on home cooking and healthy food!

Who or what inspired you to write your new cookbook “Classic Snacks Made from Scratch?”

I really like a challenge, and I really like junk food-type snacks, but always felt guilty about buying a bag of Oreos. So as my husband and I strolled the aisles of Target on one of our many, many trips there, I was inspired to try making “better” versions of the nostalgic snacks we like so much. It was kind of a joke at first to see how closely I could replicate them, but then I realized that other cooks might want to do the same thing too.

Strawberry PopTarts from Classic Snacks Made from Scratch

Everyone I talk to has a favorite snack and believe me, they all lobbied hard to make sure their beloved treats were included. Facebook polls didn’t make narrowing the field any easier, though we all had a lot of fun reminiscing over long-lost snacks from our childhood like apricot Fruit Roll-Ups!

I tried to do a mix of savory and sweet snacks and cover a lot of territory, giving equal weight to chocolatey treats, fruity and gooey things, crispy and salty chips… and I couldn’t leave the ice cream aisle out of the equation! I spent a lot of time combing the grocery store aisles to make sure I was including the major players. And I’ll admit that I snuck a few Pennsylvania-specific snacks like Tastykakes in the book, since I grew up near Pittsburgh and had to give my home state some special love.

I think making any snack at home is healthier than buying it at the grocery store simply because you know exactly what’s going into it. Sure, you might be using butter and cream and cheese and white flour, but you can choose to use organic, local cream without added hormones, and unbleached flour that’s high quality. So even if you’re making something that’s not exactly a low-fat treat, it’s still loads better for you because it’s made with REAL ingredients.

How would you encourage a person to take on this challenge?

Whether you’re trying to recreate the specific taste of a Cool Ranch Dorito or trying your hand at making your first pie crust, I think it’s important to just get into the kitchen and experiment without fear or expectation. So many great recipes are happy accidents, and the more you play around with making your own food, the more practice you get and the more your confidence grows. First-time bakers can start with something small, like Wheat Thins, and build to more complex recipes like ice cream sandwiches. The pleasure of holding in your hands (and then eating!) something you made from scratch can’t be equaled. I’m still proud of everything I make at home, even after years and years of doing it!

How long did it take you to complete creating the recipes and writing the cookbook?

Some of the recipes in the book have been kicking around for a few years, since I used to write a column for ReadyMade magazine comparing store-bought snacks to homemade versions. But the entire book process occupied me for basically all of 2012, from contract signing through the final proofreading and manuscript edits. It was a quick turn-around, but I think it was worth it!

What is your favorite snack out of all the ones in your cookbook?

Hard question! Usually my favorite snack is the one I’ve just eaten, but my sentimental all-time favorites are the Cheez-Its and the Oreos, as some of the first recipes I developed for the book, and the Sno-Balls, because they’re just so freakishly weird.

What is your New Year’s resolution regarding food and cooking?

Every New Year’s Eve, I cook for about 75-100 people (it’s a party we’ve been throwing for about a decade), so my usual New Year’s resolution is to stay out of the kitchen for a few hours! This inevitably fails and I end up making French toast or waffles for everyone—I can’t bring myself to take a day off.

This year, I resolve to do more homebrewing, something I didn’t have a lot of time for last year… and to find a new book topic! Any ideas?