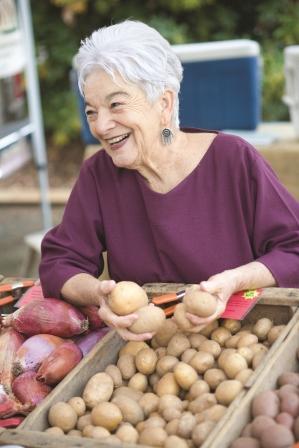 Joanne’s aim is to help people understand the benefits of eating locally grown foods that are in season.  It promotes individual health and protects the health of the environment, as well as supports the local farmers who grow the food.

“It’s a special privilege to introduce folks of the Sacramento Region to the concept of buying fresh, local and in-season produce from local farmers’ markets, farm stands, or produce stands,” Joanne said. “And it’s even better when the produce they’re eating comes from their own backyard.”

Joanne advocated for locally sourced food before it was cool. Thanks to Joanne’s efforts, Placer County saw the launch of its first Foothill Farmers’ Market in 1989. Within the span of three years, the farmers’ market expanded to six markets throughout the county.  Joanne also founded the Mountain Mandarin Festival in 1994. It attracted 1,500 attendees in its first year and more than 40,000 visitors in 2008!

The Placer County Board of Supervisors appointed Joanne as chairperson of the Placer Legacy Citizen’s Advisory Committee in 1999. The committee’s mission is to preserve farmland and working open space. Joanne also served as director of Placer County Agriculture Marketing Program for five years. The Program’s successful marketing model is a framework for agriculture marketing outreach in other Californian counties and throughout the country. In 2006, Placer Land Trust honored Joanne as Conservator of the Year due to her tireless work in preserving and advocating for local farmland.

Realizing that people may not know how to cook or eat lesser known seasonal fruits and vegetables at the farmers’ market, Joanne launched a year-long project with professional chef, Laura Kenny, to cook meals with only farmers’ markets items. Every weekend, they purchased items from the farmers’ market and on the following Monday, they cooked dishes with only those items for a dinner party of eight. They did that every week for a year. They compiled notes and eventually ended up writing a cookbook, Placer County Real Food that includes 52 healthy, easily adaptable, and delicious recipes using seasonal produce found at farmers’ markets.

This year, Joanne and Laura launched their second cookbook, The Art of Real Food that showcases the beauty of local and seasonal foods through the talents of a professional photographer, a sculptor, and an illustrator. Here is one of the recipes from their new cookbook, Sautéed Summer Squash with Almonds.

We salute Joanne in her tireless work in promoting seasonal and locally grown food! She is indeed a Food Literacy Hero!