Basil: King of the World! 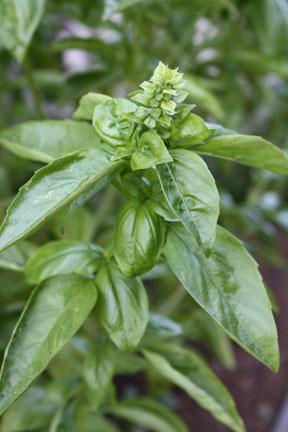 Basil is appreciated at a higher level by two very different cultures. The ancient Greeks revere it as a cure for the bite of a basilisk, a legendary creature with a head of a rooster, body of a serpent, and wings of a bat. In fact, the word “basil” is a variation of the Greek word “basileus” for “king.”

In the Hindu religion, basil is associated with Lakshmi, the wife of god Vishnu. Legend has it that when Lakshmi came down to earth, she took the form of basil. Therefore, the herb is sacred to followers of the faith, according to In Depth Info.

In addition to its cultural relevance, basil is cultivated as a culinary herb, and a source of essential oil used in food as well as fragrances in perfumes, shampoos and soaps. According to Hort Purdue, basil has been used in traditional medicine to treat headaches, diarrhea, coughs, constipation, worms, warts, and kidney problems.

A highly nutritious herb, basil is low in calories and high in protein, dietary fiber, and important antioxidants. Dried basil contains much more calories than fresh basil with 10 calories per tablespoon versus 0.5 calories. According to Livestrong.com, although dried basil contains more micronutrients, the fresh variety has much more vitamin C, vitamin A (which protects cardiovascular health), and carotenes.  Both dried and fresh basil are high in folate and vitamin K, and contain calcium, potassium, iron, phosphorus and B vitamins.

A member of the mint family, basil is cultivated extensively in California, Arizona, New Mexico, and North Carolina, as well as in France, Egypt, Hungary, Indonesia, and Morocco. It originated in Asia and the seeds and plants were spread to Egypt where it was used to embalm and preserve mummies. The herb was introduced to Massachusetts by pilgrims in the 1600s and its popularity spread throughout the colonies.

Basil may be most recognized as a popular herb in Italian cooking but it is also widely used in Asian cooking. Its aroma is extensively used in India, and its fresh leaves are used in Thai and Vietnamese cooking. For a crisp and healthy dish with a flavorful combination of basil and vegetables check out our Vietnamese Fresh Rolls recipe.

An old Romanian custom states that if a boy accepts a sprig of basil from a girl, they become engaged to be married!