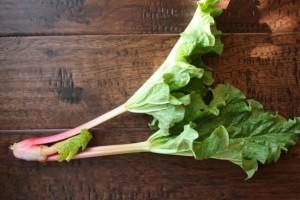 When you think of rhubarb, is the first thing that comes to mind rhubarb pie?

Rhubarb is best grown in cool climates of the Northern United States and Canada. Rhubarb season is from April to September. However, the crop should not be harvested within the first year because the stems will not be strong enough. Once ready, rhubarb resembles celery with a reddish-purple coloring.

Though similar in coloring, rhubarb and celery are not similar in taste. Rhubarb is most commonly used in desserts – namely rhubarb pie is – because the tart and sometimes bitter taste of rhubarb is hidden by the sugar.

Ripe rhubarb should have crisp looking stalks. Color is not usually an indicator of a stalk’s ripeness. Younger stalks tend to be tenderer, and thus more preferable. The stalks ends should be smooth and intact, indicating freshness.

If you haven’t tried rhubarb before, it’s currently in season. Incorporate it into your favorite dessert!