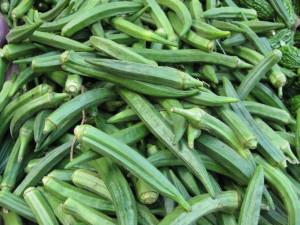 Okra is an annual vegetable that grows in warm seasons and come from the same family as hibiscus, rose of Sharon and hollyhock.  It’s also known as gumbo, which is the Swahili word for okra, and as lady’s finger in other English-speaking countries.

Okra originated in the Abyssinian center of origin of cultivated plants which covers Ethiopia, the mountainous areas of Eritrea and eastern Sudan.

The vegetable is popular in Southern cooking and it’s also featured in Indian and many other Asian dishes. When cooked, okra releases a gelatinous substance that acts as a thickener in gumbos, stews, soups and curries. Boiled okra has a texture that’s similar to zucchini or eggplant but with a bitter flavor. When fried, it is crunchy like green beans and will not have the slimy substance.

Okra is incredibly nutritious!  It’s rich in soluble fiber that helps to lower cholesterol as well as insoluble fiber that helps to keep the intestinal track healthy. Its seeds and pulp are rich in the antioxidants catechin, epicatechin, procyanidin B1 and B2, quercetin, and rutin. These antioxidants help to fight the damage caused to cells by stress and environmental elements. Okra also contains vitamin B6, folic acid and calcium.

Fun Fact: Okra was the favored vegetable for the Olympic athletes of the Beijing Olympic Games!

Back
This item appears in:
Food Wiki
September 4, 2013