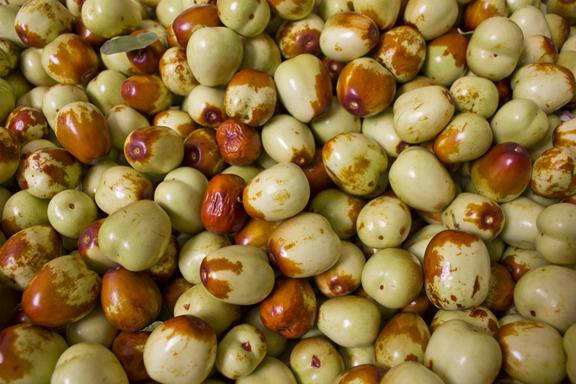 Jujubes, also known as Chinese dates, are a round or oval-shaped fruit with a thin edible skin, white flesh and a seed pod. They vary in size from that of a cherry to a plum.

Jujubes originated in southern China and there are now more than 400 varieties of the fruit. They grow especially well in Southern California during its hot summers. The jujube tree grows easily and does not need much maintenance other than occasional deep watering. It can withstand cold and drought, and can produce a lot of fruits.

The jujube fruit has a short shelf life so it’s typically dried for later use, even though it can also be enjoyed fresh off the tree. Fresh jujubes have a crisp texture and a sweet apple-like flavor, and will turn from green to a golden brown when ripe. When dried, the fruit resembles a large raisin with a deep reddish brown color. It’s used in cakes, syrups, candies, sauces and stews. In Asia, dried jujubes are even added to savory soups (such as watercress or lotus root soups) to add a touch of sweetness for a balance of flavor.