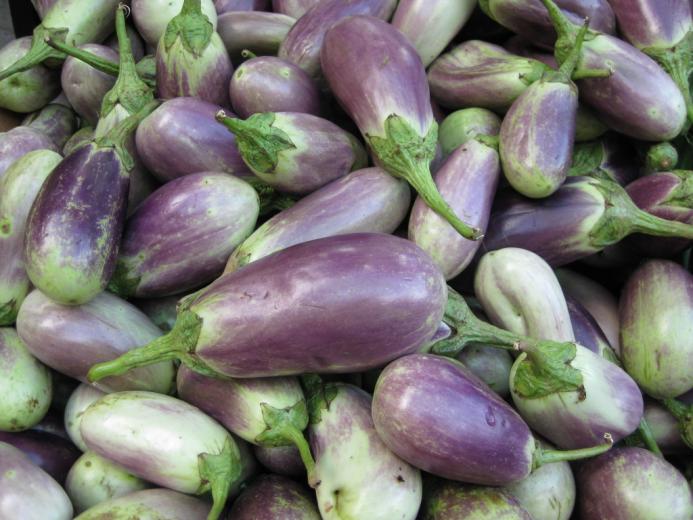 Eggplant is a member of the nightshade family, and it’s related to the potato and tomato. Often mistaken for a vegetable, eggplant is actually a fruit, and to be more precise, it’s a berry.

It’s typically large and dark purple, but eggplants come in a variety of sizes (from two to 12 inches), oblong and round shapes, and white, green and purple colors. The name “eggplant” came from how the first varieties of the fruit were actually egg-shaped. It’s known as aubergine in France, and brinjal in India, Malaysia, Singapore, the West Indies and South Africa.

Early varieties of eggplants were bitter and sour tasting, and that is why Europeans grew them for decoration rather than for consumption. In fact, at one point in time, people thought the eggplant was poisonous and called it the “raging apple.”  In the 18th century, new varieties of eggplant were developed with a more appetizing flavor.

Choose young eggplants without blemishes on the skin and store them in a cool dry place. They should be consumed within a day or two of purchase as the fruit becomes more bitter with age. To keep them longer, just store them in the refrigerator. They can be boiled, grilled, roasted, baked, sautéed and stewed, and is a star ingredient in a variety of cuisines.  The eggplant season is from June to October so look for this delicious fruit in your local farmers markets.