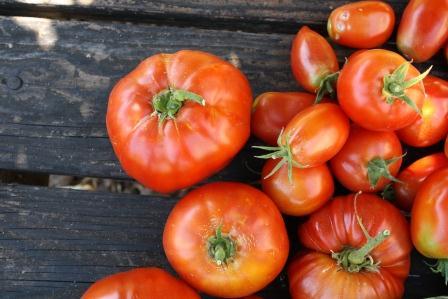 You Say Tomato, I say Tomato

With hundreds of varieties ranging in size, flavor, and color, the tomato is not only aesthetically beautiful, but it is also incredibly nutritious. It is a fruit to be reckoned with!

History of the tomato

Even though tomatoes are generally associated with Italian cuisine, they are native to South America, in the area occupied by Bolivia, Chile, Columbia, Ecuador, and Peru. The first tomatoes were cultivated in Mexico by the Aztecs and the name might have originated from the Aztecan word “tomatl” that means “swelling fruit,” according to WH Foods. Europeans were first introduced to the fruit when Spanish explorers brought tomato seeds from Mexico to Spain in the 1500s. However, back in the 1500s, the popularity of the tomato did not take off initially. Some Europeans were skeptical of the tomato because it was a nightshade plant, and they believed it was potentially poisonous. It was the Italians who took the first bold step in using the tomato as food in the 1520s.

Tomatoes did not get to North America directly from Central or South America. They were brought to America by European explorers and settlers in the late 1700s. Today, according to the Herald Sun, Americans consume more than 12 million tons of tomatoes a year!

In a botanical sense, tomato is not only a fruit, but also a berry since it is formed from a single ovary. This fruit is incredibly rich in antioxidants including vitamin C and E, beta-carotene, manganese, and lycopene, a flavonoid antioxidant. According to WH Foods, research has shown that lycopene is especially beneficial to bone health and may help lower the risk of skin and breast cancers. In addition, eating tomatoes can help lower total cholesterol, which leads to healthy hearts! Studies also have shown that the antioxidants in tomatoes may protect the prostate, eyes, pancreas, liver, kidneys, and the bloodstream.

In addition to its rich antioxidants, tomatoes also are an excellent source of potassium, vitamin B6, folate, dietary fiber, and vitamin K.

Tomatoes are used in a variety of cuisines and can be eaten cooked or raw. In the South of Spain, tomatoes are the star in a summer soup called Salmorejo, enjoyed by locals for lunch. Tomatoes can also be an excellent addition in healthy sandwiches. For Food Literacy Month, may we suggest adding a slice or two of this sweet “love apple” to give your sandwich a nutritious punch!