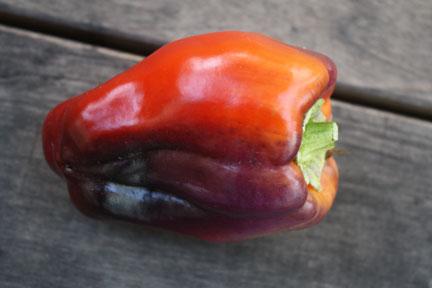 The Wonders of Bell Peppers

Red, green, yellow and orange, the colorful and crunchy bell pepper adds a mild sweetness and a healthy kick to a variety of dishes.

Cultivated for more than 9,000 years, bell peppers are native to Central and South America. While exploring prehistoric caves in Peru, archeologists found the remnants of pepper seeds. According to Aggie Horticulture, when introduced to the fruit (botanically, it’s a fruit) grown by Indians in the Caribbean, Christopher Columbus named it “pimiento” or pepper in Spanish.  The tart flavor reminded him of the black pepper from the East Indies so he mistakenly called the fruit “pepper.” However, the black pepper is of the piper nigrum variety and bell pepper belongs to the capsicum genus. Columbus brought peppers back to Spain where it became instantly popular and the cultivation of the fruit soon spread throughout Europe. Americans have English immigrants to thank for bringing the bell pepper seeds to cultivate in the New World in the 18th century.

Although we are familiar with the red, green, yellow, and orange bell pepper, famers have used modern breeding methods to cultivate lavender, purple and chocolate peppers. Previously, people only had the choice of green or red bell peppers, with the red pepper being the mature version of the fruit. According to WH Foods, studies have shown that ripe bell peppers have more vitamin C, carotenoids, and antioxidant capacities. Ripe bell peppers (any color other than green) will feel heavy, have deep and bright colors, and be firm to the touch. The phytonutrients in the bell pepper will be damaged if exposed to high heat, so it is best when the fruit is eaten raw or lightly cooked.

WH Foods also reports that bell peppers are low in fat (less than 1 gram of total fat in one cup), high in vitamin E, and a good source of the antioxidant mineral manganese and magnesium (for good bone building). They also are an excellent source of vitamin A, K, B1, B2, B3, B5 and B6, fiber, folate, potassium, and molybdenum that supports enzymes.

Bell peppers are popular throughout the globe and can be grown in a variety of climates. China has become the top producer of bell peppers, with Mexico coming in second and the United States coming in third. California and Florida are the largest bell pepper-producing states and the average American consumes 9.5 pounds of bell peppers per year! The sweetness and crisp of the red bell pepper makes it a favorite element in many salads. For a satisfying and tasty summer salad, check out our quinoa salad recipe.