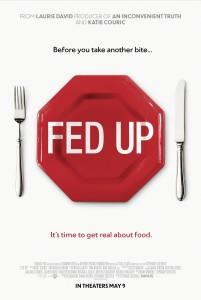 On Thursday night, Tower Theater’s main hall opened for a sold-out exclusive screening of sensational food documentary FED UP, hosted by Food Literacy Center, Assembly member Roger Dickinson and Sacramento Food Film Festival. After the doors were opened, the hall brimmed with activity as a wide variety of community members gathered to learn more about what’s in our food.

The film began with a stirring introduction from executive producer and narrator Katie Couric, as she explained America’s rising rate of obesity as a highly systematic phenomenon, instigated by big food processing corporations like Tyson and Kellogg as far back as the 1970s.

Starting with a lawsuit that began over the issue of an excess of supermarket foods with high fat content, Couric divulged the dirtiest of the dirt on food lobbyists who were directly responsible for overruling a measure that would have replaced the majority of artificial food with natural food in our stores.

Though many companies did begin to remove fat from their foods, the amount of sugar often doubled, misleading families to think that these new “light” or “reduced fat” products were healthy.

High-fructose corn syrup, which former President Bill Clinton admitted to viewers “is not a good use of corn,” presents a familiar scourge to be reckoned with, but sugars with esoteric names like “lesys” or “sorghum” that one can scarcely recognize let alone pronounce have been sneaking into our meals for decades.

Former Commissioner of the Food and Drug Administration Dr. David Kessler reflected in a following interview that this example of corporate deception can be attributed to the fact that “our culture puts profit over public health.”

To personify the devastating effects of foods which, as Kessler explained, “literally hijack your brain,” Couric included the stories of three preteens who struggle to overcome their addiction to sugar and processed foods and thereby mitigate their weight.

The audience feels Olivia’s pain of being wrongfully incriminated for her weight, especially as she tearfully tells of how other girls at school bully her into running just to see her fat jiggle.

Since our media often implicates obesity as something that can be fixed simply by following the classic mantra, “eat less, exercise more,” Olivia and others soon discover that, despite their best efforts to be healthier, they and their parents have been hoodwinked by food manufacturers.

Some corporations such as Coca Cola go so far as to fund self-serving scientific research to “prove” that their products aren’t unhealthy, deliberately misinforming the public.

And as soon as we’re born, products like baby food train us to want food with excessively high sugar content.

Couric deftly builds on this argument by putting a Winston cigarette commercial side by side with a Fruity Pebbles ad, both of which utilize Fred Flinstone pining for his processed fix.

Such subliminal messages manipulate kids into thinking that such processed foods are their “friends,” so they’ll be more likely to nag their parents into buying those products at the grocery store.

But thankfully, the film wasn’t all doom and gloom—it ended with the three kids as they explored the benefits of healthy eating by replacing their routine of afternoon Cheetos with an afternoon salad, having peas with steak instead of mashed potatoes, and cooking with their families.

Though the outcome of their new diet was bittersweet, kids learned that simply being aware of how corporations were manipulating them made the issue easier to stomach.

The film called upon viewers to join forces, citing the success of public outcry to successfully ban cigarette marketing from national airwaves. A similar public movement will be necessary to tackle the big interests of major junk food corporations.

During the panel that followed the film screening, executive director of Food Literacy Center, Amber Stott, encouraged the audience to support their work teaching cooking and nutrition to local children.

“Together, we can hope to make a difference,” said Stott.