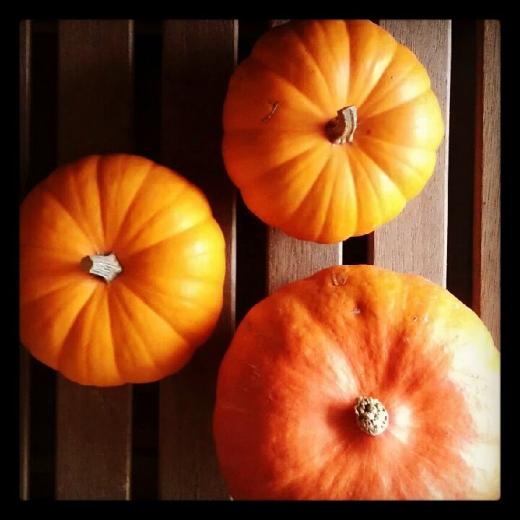 Scaring Up Some Halloween Food Facts!

Boo! Halloween is only two days away and people in the United States and across the globe are getting their costumes and candy ready for a night of mischief and fright. Before you get trick or treated by mini witches, vampires, superheroes, and fairies, learn all about how pumpkins, apples, and candy became a part of Halloween tradition.

Halloween evolved from the ancient pagan Celtic tradition of Samhain which celebrated the last of the harvest and preparing for winter. Ancient Celts also believed that on Samhain, the door to the spirit world would be opened and souls of the dead as well as other spirit beings would wander on earth.  The Celts lit bonfires for friendly spirits and dressed up in costumes to scare and confuse evil spirits. They also celebrated by eating late harvest foods such as beets, potatoes, apples, kale, and turnips.

Halloween isn’t complete without the carving of pumpkins.  However, back in ancient times, jack o’ lanterns were made of turnips instead since pumpkins were not native to the British Isles.  This practice came from an old Irish myth of a man named Stingy Jack who tricked the Devil several times, first by convincing the Devil to turn into a coin and then years later, by climbing a tree. When Jack finally died, God denied him entry into heaven because he was such an immoral character. The Devil had promised Jack he would not claim his soul, so he sent Jack to the night with only a burning coal to guide him. Jack put the burning coal into a carved out turnip and has been roaming the earth as a restless spirit.

When English pilgrims settled in America in the 1600s, they brought many of their traditions with them. They soon found that pumpkins made better jack o’ lanterns than turnips and started using them to scare off Stingy Jack and other bad spirits.

Apples have been a huge part of Halloween since the ancient celebrations of Samhain, particularly because it is a late harvest fruit.  People celebrated by feasting on apple potato cake, which was also used in early trick-or-treating, or mumming. People dressed up in costumes and went from house to house, singing and dancing in exchange for these cakes.

When the Romans conquered Britain, they brought with them the apple tree and the legend of the goddess Pomona (goddess of fruit trees and fertility). The festival celebrating the goddess happened to coincide with Samhain, and bobbing for apples became a part of the festivities. Young, unmarried people tried to bite onto an apple floating in water or tied to a string. The first person to bite onto the apple will be the next one to marry.