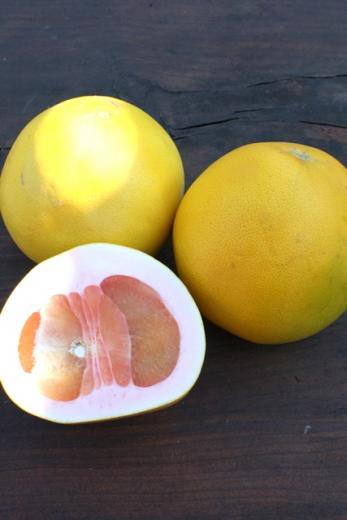 When I was a kid, I used to call pomelos giant oranges, because, physically, they look like supersized oranges, albeit with a more greenish tone to the skin. The largest fruit in the citrus family, the pomelo has the distinction of being used as a good luck symbol during Chinese New Year, and has been growing in popularity in California due to its juicy, sweet and nutritious pulp.

Considered the grapefruit’s ancestor, pomelos originated from and still grow wild in Malaysia and Indonesia. The name pomelo is a variation of the Malay word of the fruit, “pumpulmas” and the Dutch translation “pompelmoes.” It is called a variety of names across the globe, including shaddock, named after Captain Shaddock, who brought the fruit to the Caribbean in the mid-eighteenth century. Farmers have cultivated different specimens of pomelos around the world, resulting in fruits that range in sizes (from a large grapefruit to a basketball), color of the pulp (red to pale translucent yellow) and the thickness of the skin. Pomelos grow the best in tropical regions but several varieties grow well in the mild climates of Florida and California. They are in season in California from December to February.

During Lunar New Year, which occurs around January or February, pomelos are displayed in houses and also consumed for good luck. The Mandarin word for pomelo, pronounced as “you,” also means “to have,” which is a symbol of good fortune, health and happiness for the household. A large pomelo is usually shared among family members by distributing the segments and eating the pulp without the pith and thick white membrane. In Thai and Vietnamese cuisine, pomelo is used in fresh salads. In China, the peel is used in sweet soup desserts or candied. In Indian cities, pomelo is pickled with salt, oil, red chilies and other spices, or sprinkled with salt and/or sugar as a snack for children.

Depending on the specimen, the pomelo can have a really thick skin. Remove the top layer with a knife and then make four or five cuts lengthwise in the rind without cutting into the flesh. After that, pull away the rind with your fingers and peel the segments out. Finally, peel away the pith and thick white membrane to get to the pulp.

For a recipe idea, check out our Asian chicken salad with pomelo. It’s delicious and easy to make!