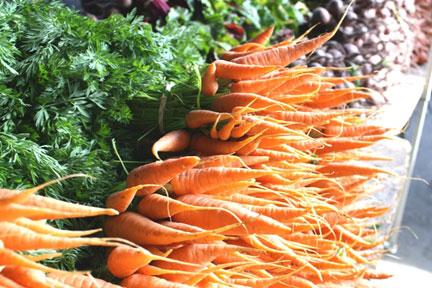 The Multi-Colored History of Carrots

Sweet, crunchy, and irresistible to cartoon rabbits, the carrot has been enjoyed by humans as food and nourishment for thousands of years. Prior to the 16th century, scholars doubt that orange carrots even existed. It is hard pressed to imagine purple, white, red or black carrots, but those were its primary colors prior to the cultivation of orange carrots.

Fossil pollen from the Eocene period (55 to 34 million years ago) has been identified as belonging to the Apiaceae, which is a part of the carrot family. According to Carrot Museum, carrots were grown in the Afghanistan region 5,000 years ago, and they were mostly purple in color, although some were black or white. Egyptian temple drawings from 2,000 BC depict purple plants, which Egyptologists believe to be purple carrots. Even though present day carrots are synonymous with the color orange, prior to the 16th century, they were likely to be white, purple, red, and yellow. Presently, in certain parts of the world, you can still find these different colored carrots.

The advent of orange carrots

Legend has it that Dutch growers in the 17th century cultivated orange carrots as a tribute to William of Orange, who led the Dutch in the fight for independence from Spain. However, according to Carrot Museum, it is more likely that Dutch growers cultivated the orange carrot through selective breeding as a sweeter and less bitter variety than its yellow counterparts. It was then adopted as a royal vegetable in honor of the House of Orange.

Presently, more than 80% of carrots produced in the United States are grown in California. WH Foods reports that adults in the United States consume around 12 pounds of carrots a year! That is excellent news because they are packed with beta-carotene (converts to vitamin A in the body), antioxidants, vitamins K and C, fiber, potassium, and other important vitamins and minerals.

Carrots are used in a huge variety of cuisines because of its versatility and sweetness. It can be consumed raw in salads, juiced, boiled in soups, roasted, stir fried, pickled, etc. Carrots add a crunchy sweetness to our Vietnamese bun (noodle) salad, blending well with the other vegetables and herbs to create a refreshing fusion of flavors.