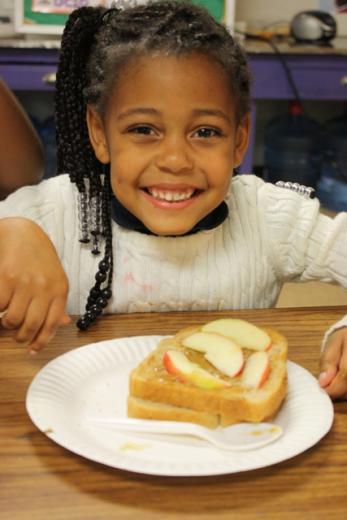 March is National Nutrition Month and for the past month, we have been teaching 100 K through 5th grade kids at Capitol Heights Academy how to make healthy choices. The next three lessons of our curriculum, “Your Peanut Butter Sandwich can Save the World,” had the kids take part in plenty of fun and educational hands-on activities!  They learned how to follow a recipe, why homemade food is healthier and cheaper than fast food, and what the different types of sugar and fat are.

We also implemented a one-month evaluation to gauge student progress. Overall, children showed an improvement in their food literacy. The kindergarteners and first graders showed the highest level of change, especially when asked whether healthy foods taste good (100% of them now say, “yes!” compared to 82% who said “no” one month prior). The second and third graders showed a marked improvement in appreciation of healthy food, while the fourth and fifth graders showed that they grasped the more complex nutrition facts, such as understanding what foods contain protein.

Children smiled in anticipation when invited to make their own sunflower seed butter and apple sandwiches using a recipe.  At the same time, they learned why fiber and protein are good for their bodies. Some of the kids were apprehensive about trying sunflower seed butter and adding apple slices (instead of jelly) to their sandwiches. But when they finally took a bite of their sandwiches, they were asking for seconds!

“Everything in the sandwich has fiber!” (4-5 grader) 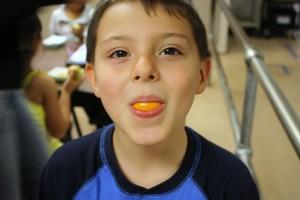 We showed the kids what’s inside a Taco Bell bean and cheese burrito and had them create the same burrito using store bought ingredients. We taught them that the homemade version was more nutritious and cheaper than the Taco Bell version.  We also showed them how many real potatoes go into making a bag of chips, and explained that potatoes have fiber and vitamins that chips lack.

“Homemade food is cheaper and better for your body.” (2-3 grader) 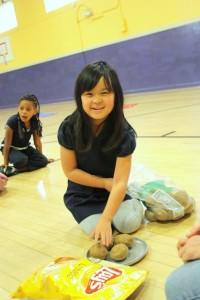 Through science experiments, kids learned about the difference between plant fat and animal fat, and how different types of sugar affect their bodies. The kids tested various food items to see whether they have fat in them by rubbing them on brown paper. If they had grease stains on them, they contained fat. We also created “blood” with corn syrup and red food coloring, and had volunteers put the same amount of sugar and flour in each container of “blood.” Kids got to see how sugar is absorbed into the blood much quicker than flour to help them understand that although sugar gives them a rush of energy, foods made from flour can sustain them longer.

With unfettered curiosity and wide-eyed enthusiasm, these kids are literally and figuratively eating up healthy food! They love trying new fruits and vegetables, and are becoming more food literate every week.