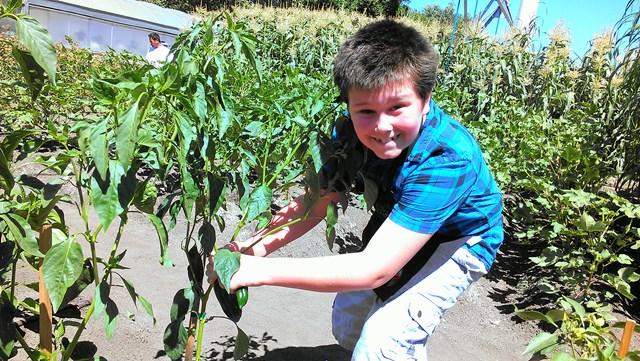 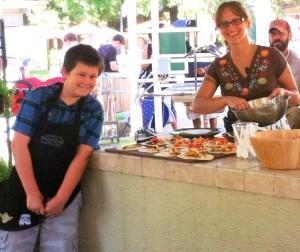 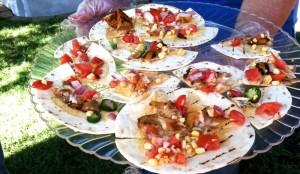 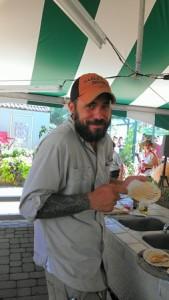 Our amazing volunteers have been busy demonstrating how to put together delicious and healthy meals with seasonal produce at the California State Fair. They have been there every day since the fair started and will be doing cooking demos until the last day of the fair on July 28.

On July 16, our founding executive director Amber Stott partnered with 11-year-old Aidan Hennessey whose Quinoa Creation was a favorite recipe in Sacramento’s 2012 Food Stamp Challenge. Aidan has been cooking since he was two years old and the first dish he ever made was broccoli cheese soup.

“Aidan is 11 years old and he’s using a knife like a pro; that’s not typical,” Amber said.

Aidan’s mom, Carrie Hennessey, said that Aidan became interested in food literacy when he learned about California Food Literacy Center through his sister Ella who joined our Kids Food Literacy Sandwich contest last year. He decided to create his own cooking show “Short Order Cooks” on YouTube to inspire kids and families to eat healthier foods.

“He came home one day and said, ‘Mom, all my friends, they just eat junk food, they don’t know how to cook, they don’t ever do anything. I want to make a video to show them that they can try new stuff and it’s not scary and that they can cook it themselves with their parents,’” said Carrie.

For the fair’s Dirt to Dish cooking demonstrations held at The Farm, Amber and Aidan recreated Amber’s grilled tilapia tacos. They also made a sauce to go on the tortillas and fresh corn salsa to top off the creation. All the produce they used was picked from the State Fair’s farm that features beautiful Californian seasonal fruits and vegetables. Amber said that the key ingredient of fish tacos is a good sauce and something crunchy on top. In the winter, she adds an Asian slaw on top of her fish tacos but in summer, sweet corn is the perfect topping.

Our Food Literacy Advocate and the farmers market manager and chef at Feeding Crane Farms, Paul Poore has been doing one or two cooking demos a day at the California State Fair. At every demo, Chef Paul is surprised with various ingredients with which he has to use to create a dish on the spot. He created grilled cantaloupe vinaigrette on his first day that tasted like peanut butter and will be cooking with tongue this weekend!

“I’m going to marinate and make tongue kabobs. Just to show that it may be gross to most people, but you can make it edible and yummy. Never be afraid of that,” said Chef Paul.

Every recipe he creates is a healthier version of something people would typically make at home. He wants to show people that it is easy to create delicious and healthy dishes with vegetables. Ever since Chef Paul started teaching food literacy in our classes, he has started to eat healthier and is even teaching his family to eat healthier. He has awesome advice for people who may be nervous about cooking at home.

“Food’s simple. It’s meat, potatoes and vegetables. It’s nothing you need to stress about,” said Chef Paul. “It’s a fun way to have an experience with your family and friends, whatever you want to do.”

Chef Paul will be doing cooking demos every day at the State Fair until July 28. For a complete list of our schedule, visit Food Literacy Fun at California State Fair.