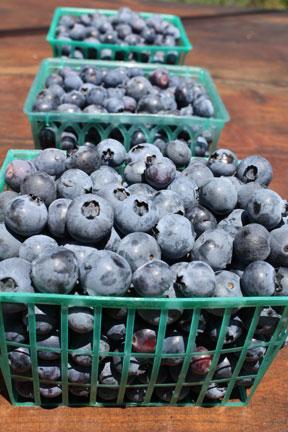 Generations of kids have grown up hearing parents tell them, “eat this; it’s brain food!” Today, we can enjoy sweet, delicious, and nutritious blueberries that not only nourish our bodies, but apparently our brains as well!

As one of the most popular fruits in the United States, blueberries also have the distinction of being recognized as a superfood! They are bursting with antioxidants which combat free radicals that can damage the body’s cellular structures and DNA.  In fact, blueberries have one of the highest antioxidant capacities among all fruits, vegetables and spices. According to WH Foods, research studies have shown that the antioxidants in blueberries have whole body relevance, instead of being concentrated in the cardiovascular system. After consuming blueberries, the antioxidant status is strengthened in every system in the body!

According to TODAY Health, a new study by Harvard Medical School suggests that women who eat more berries may have a lower risk of cognitive decline in old age. As shown by their scores on memory and thinking tests, participants with a higher level of berry intake showed delayed cognitive aging by up to 2.5 years. In particular, blueberries and strawberries, with high levels of compounds called flavonoids, seemed to be the most beneficial. Research has shown that the antioxidant and anti-inflammatory properties in flavonoids can help alleviate the harmful effects of stress and inflammation of the brain, which can lead to cognitive impairment.

Blueberries are one of the few fruits that are native to North America. Native Americans have been enjoying this delicious fruit for hundreds of years! In fact, they called them “star berries” because the five points of the blueberry blossoms make a star shape. In addition to eating blueberries as food, Native Americans consumed them to treat persistent coughs and other illnesses, and also used the juice to dye textiles and baskets, according to 2020site.org.

Blueberries are used in a variety of desserts (pie, cheesecake, and ice cream, just to name a few). But the healthiest way to enjoy blueberries is to eat them raw. Sprinkle them in a salad or toss them into a bowl of cereal. According to WH Foods, studies have shown that blueberries can be frozen without damaging their delicate anthocyanin antioxidants. Fresh blueberries can be stored in the freezer and then enjoyed later in a smoothie. For a truly delicious, yet nutritious recipe featuring blueberries, check out our Whole Grain French Toast with blueberries recipe.