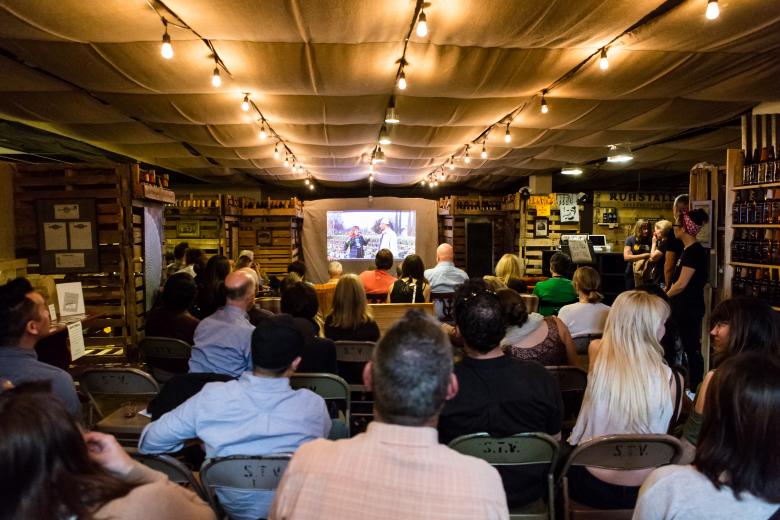 Since the beginning of the century, an influx of food-focused films have been cooked up by film producers, creating a food-conscious public movement around food issues similar to that of Upton Sinclair’s 1906 book “The Jungle” about Chicago’s meatpacking industry, which eventually led to the establishment of the Food and Drug Administration.

“Food documentaries bring food issues to a broad audience, and can definitely motivate change whether on a personal or political level,” said Sarah Nelson, executive director of the San Francisco-based nonprofit 18 Reasons that teaches cooking and nutrition, and founder of the San Francisco Food and Farm Film Festival. “As the food movement grows, the food film movement follows.”

Delectable close-up shots of velvety greens sautéed in garlic and butter, melting cheese, and sizzling steak on the silver screen may unleash Pavlov’s dog-like salivation or gluttonous desire, while scenes of pastoral living may call people back to the land, but documentaries are meant to inspire a better understanding of the food system and its impact on lives and the planet.

“In talking with people all around the country, it’s clear how important films are in telling the story of food,” said Anna Lappé, author of “Diet for a Hot Planet: The Climate Crisis at the End of Your Fork” and director of Real Food Media. Lappé says documentary films shine a light on stories that need telling and help society make sense of the world. “Stories change lives,” Lappé said. “One of the most powerful ways to share stories is through films and documentaries.”

Morgan Spurlock’s 2004 documentary “Super Size Me” investigated the influence of the fast food industry and became the highest grossing food film—$11.5 million—shown in over 230 theaters. National attention from the film led McDonald’s restaurants to remove the ‘Super Size’ option from its menu, and the doc has been credited by The Guardian for being more influential than most Oscar winning films. However, McDonald’s never attributed the Super Size demise to the documentary, rather a loss in sales.

“Some documentaries just make you want to throw your hands up in despair,” Nelson said. “Some leave you feeling inspired and empowered to do something positive.”

“People are hungry to get together offline and hear, and share, stories,” Lappé said. “Film festivals are a great way to do that.”

Viewers indulge in creative journalistic examination of the cultural significance, political regulations, technological innovation, human and environmental health impacts, and celebration of food while eating meals grown and prepared by local farmers and chefs. Some food film festivals serve as a conduit for public discussion on local food systems, and create a new way of perceiving how communities understand the sustenance that nurtures them.

In 2007, Travel Channel host and “Hamburger America” filmmaker George Motz founded the first ‘Food Film Festival’ in New York City, which has since spread to Chicago and Charleston.

“What could connect to, and impact our lives more than food?” asked Lappé. “As the boom in interest in food films shows, more and more people want to see food in all its complexity shared on the big screen.”

Originally, Motz’s concept was a food-porn addict’s dream—a multi-sensory experience where food films were screened with munchies profiled in the films. Due to the increase of food documentaries, the festival has become a competitive film contest, offering a variety of awards selected by esteemed members in the food and film community.

Documentaries have a reputation of leaving viewers with the question of “what can we do?” Many film festivals contribute to community food education by donating event proceeds to organizations that provide food-learning services, volunteer opportunities or increase food access to area residents. Last year, the 2015 Sacramento Food Film Festival catered to 910 attendees and raised over $35,000 towards the nonprofit Food Literacy Center’s afterschool food-education programs for low-income elementary students.

Documentary filmmakers thirst for knowledge and storytelling can have serious influence and persuasion to bring about real changes in society.

According to Nelson, “Food documentaries always remind me how hard it is to make and grow good food, and how much respect we owe our farmers and chefs.”

Pairing a food film with the right meal, beverage, and conversation is a delicious and educational indulgence.

“Last year’s pairing of food inspired by the themes of the films involved a delicious helping of toast with Sriracha mayonnaise,” Lappé said of San Francisco’s Food and Farm Film Festival. “Not sure I would put it in the gluttonous category, but it was delicious and fun.”

In Sacramento, the 2016 Sacramento Food runs from April 7 – 16 with seven events at various venues across the city. Ticket prices range from FREE to $95 depending on the event, meal and entertainment package included. Proceeds will benefit the Food Literacy Center, which provides food education to low-income elementary students in afterschool program across California’s Capital Region.

Back
This item appears in:
Article Matthew J. Blackburn
March 23, 2016