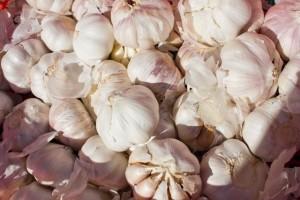 Garlic, also known as the stinking rose, is a part of the lily, or alium family, of which the onion is also a part of. Originally from Central Asia, the garlic plant spread across the world as food, flavoring and medicine in ancient times. Garlic was introduced to the New World by Spanish, Portuguese and French explorers.

This delicious herb punches up flavor in a variety of cuisines, playing the key role particularly in Mediterranean and Asian cuisines. The bulb consists of sections called cloves that are enclosed in a parchment-like casing.  Garlic is mainly available dried, although fresh ones (known as “green” or wet” garlic), which is milder in flavor, can be found in some stores when they are in season from July to October. Available year-round, the major varieties of dried garlic in the US are the white-skinned strongly flavoured American garlic, the mauve-colored Mexican and Italian garlic, and the mild flavoured elephant garlic, which is not a true garlic but a relative of the leek.

For the most part, smaller bulbs have more intense flavor than the larger ones. Store garlic in a cool, dark place. Unbroken bulbs can be stored up to two months and individual cloves will keep three to 10 days. Many gardeners grow garlic among flowers or root vegetables to protect these plants from being attacked by pests.

Besides adding flavor to dishes, garlic has been used in traditional Indian and Chinese medicine to cure a variety of ailments. It’s packed with vitamin B-6, vitamin C, potassium, copper, iron, calcium, magnesium, manganese, zinc and heart-healthy selenium.