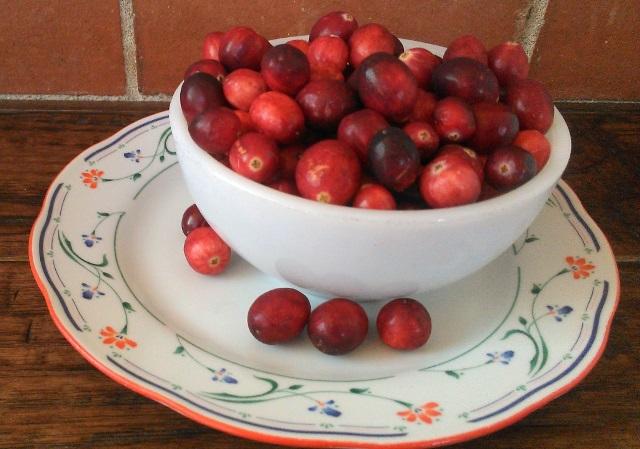 One of the few fruits native to North America, the cranberry was used extensively by Native Americans as food, medicine and natural dye long before the arrival of the Pilgrims. It was called different names by different tribes and it wasn’t until the arrival of the Dutch and German settlers that the name “crane berry” was introduced. They named it so because the vine blossoms of the cranberry plant resembles the neck, head and bill of a crane, and the name evolved to what we know today as “cranberry.”

Cranberries are grown on sandy bogs or marshes and because the fruit floats, some bogs are flooded when they are ready for harvesting. Part of the Heather family, the cranberry plant is a low-growing, woody perennial that produces ripe fruit in late September to early October. Five states are the chief growers of cranberries including Massachusetts, New Jersey, Wisconsin, Oregon and Washington. They are also cultivated in British Columbia, Chile and Quebec.

Cranberries may have been served at the first Thanksgiving dinner in Plymouth. Today, 80 million pounds of cranberries are consumed by Americans during Thanksgiving week! That’s 20 percent of the yearly cranberry consumption in the US.

Raw cranberries are rich in vitamin C, dietary fiber and manganese, and are a good source of vitamins E and K.