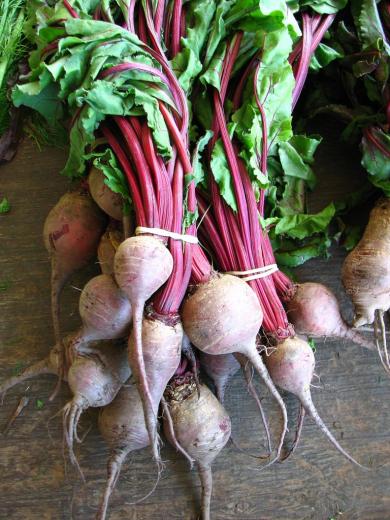 There is nothing humble about beets. The blushing root vegetable is an excellent source of anti-inflammatory compounds, antioxidants, vitamins A and C, and fiber. It can be eaten in a variety of ways and is even used to make table sugar, due to its high sucrose content.

The ancestor of the beet originated in prehistoric times in North Africa and grew wild along the seashores of Asia and Europe. The vegetable was domesticated by 800 BCE, and by the 16th century, large and coarse beet roots were used as livestock feed.

In 1747, through experiments, renowned German chemist Andreas Marggraf discovered that the sugar from beets was the same as the sugar from cane. Another German, Moritz Baron von Koppy, developed the “white Silesian,” the ancestor of all modern sugar beets and built a large sugar beet processing plant. In the beginning of the 19th century, the English blocked the shipment of sugar into Europe during the Napoleonic wars, and thus, out of necessity, the beet sugar industry was born with the first factory built in Poland.

The pigments that give beets their rich colors are called betalains, which has two types: betacyanins and betaxanthins. The former are the pigments in dark red, purple and crimson beets, and the latter are pigments in yellow beets. These betalains have an unusual mix of antioxidant and anti-inflammatory properties.

According to WH Foods, the unique phytonutrients in beets provide antioxidant support in ways that other antioxidant-rich vegetables don’t. In particular, early research has shown that beets help to maintain eye health and overall nerve tissue health. Additionally, the anti-inflammatory compounds in beets helps regulate the cardiovascular system. WH Foods also reports that betalains helps the body to eliminate toxins.

The greens and stems of the beets can be eaten raw or sautéed (like Spanish or Swiss chard) and are packed with nutrients, vitamins, minerals and carotenoids such as beta-carotene.

Choose small to medium-sized beets that are firm, smooth and have a deep color. Don’t wash the beets before storing. Place them in a plastic bag and store them in the refrigerator for up to 3 weeks. You can eat them raw, or roast, steam, boil or sautee them. For optimal nutrition and flavor, it’s best to cook them lightly. Keep steaming time to 15 minutes and roasting time less than 60 minutes. For a delicious and flavorful summer delight, check out a roasted beet salad recipe, courtesy of renowned cookbook author Joanne Neft.